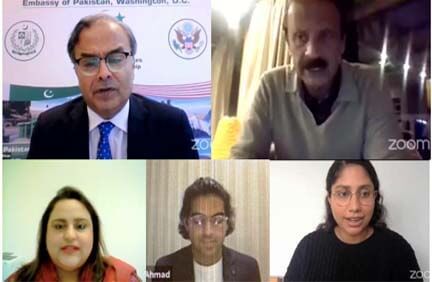 In its endeavor to highlight the tourism potential of Pakistan, the Embassy of Pakistan in Washington DC organized a Virtual tour on “Confluence of History, Culture & Cuisine of Lahore.

In his opening remarks, Pakistan’s Ambassador to the United States, Dr. Asad Majeed Khan said that the event was the third episode in the Embassy’s Webcast series on showcasing tourism potential of Pakistan. The Ambassador said that the purpose of the event was to introduce Lahore to the audience in the United States as a thousand years old city of gardens, monuments, mosques, shrines and culinary delights. Lahore’s rich history and culture, the warmth and exemplary hospitality of its people and its exquisite cuisine make it a must travel destination for all tourists.

Director General Walled City Authority Lahore, Kamran Lashari in his key note address highlighted Lahore’s significance as the cultural capital of Pakistan. He spoke about Lahore’s glorious past and how it has evolved over the centuries. He also screened a documentary that highlighted the important role played by the Walled City Authority, Lahore in restoring the past glory of the historic Walled City. The documentary also presented a breathtaking bird’s eye view of some of the most famous landmarks of Lahore including Minar-e-Pakistan, Iqbal Park, Badshahi Masjid, Hazoori Bagh, Mall Road, Metro Bus, Safari Park, Shalamar Bagh, Chauburji, Wazir Khan Masjid, Bagh-e-Jinnah, Lahore Museum, Lahore Fort, Hazoori Bagh, and Barood Khana.

Freelance Writer, Haneen Iqbal, whose article presenting Lahore as among 52 places to visit in 2021 was featured by New York Times, spoke about her connection to Lahore. She was born in Lahore but had never lived there. When she returned to the city as an adult, Lahore became her favorite destination. She said that visiting Lahore and experiencing the beauty of its culture was a transformative experience for her and her friends.

Visual Artist, Photo-Journalist, Researcher and Story-Teller, Faizan Ahmad, who has also authored the book ‘Lahore by Metro’, made a presentation on the sights and sounds of Lahore based on his interactions with the people of Lahore from diverse backgrounds. He said that the most striking thing about the people of Lahore is their warmth and willingness to welcome everyone with open arms.

A diverse set of audience viewed the event, which was also live streamed on the official Facebook page of the Embassy.