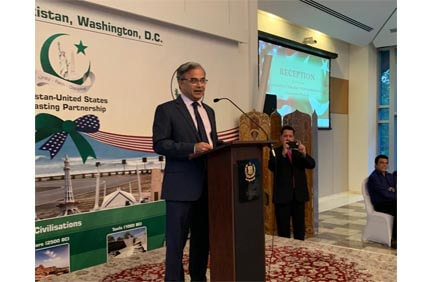 In his welcome address, Ambassador Asad Majeed Khan said that the Pakistani American community was an asset for Pakistan and the government viewed them as equal partners in country’s socioeconomic development. He said that the Governor was a leading role model for the overseas Pakistanis and had worked tirelessly for the rights of the Pakistani diaspora.

The Governor Punjab, in his remarks, said that the Pakistani-Americans were an important bridge between Pakistan and the US. He lauded their contributions towards stronger Pakistan-US relations and termed them as an important stakeholder in Pakistan’s progress and prosperity. He praised the Pakistani diaspora particularly those in the US for positively contributing to Pakistan’s economy through investments and remittances. He urged the community members to continue supporting Pakistan-US relations and contribute to the national development of the country.

Recalling his experience as an overseas Pakistani in United Kingdom, the Governor said that the Pakistani-American community, especially the second generation, should actively participate in the US political system and public service.

Governor Punjab also highlighted the steps taken by the Government to improve Pakistan’s economy and attract investments from abroad. He said that the government was taking measures to facilitate the overseas Pakistanis and resolve their issues. He added that the Government was committed to improving the lives of common people in Pakistan.

Governor Punjab highlighted the plight of both Kashmiris in Indian Illegally Occupied Jammu & Kashmir (IIOJK) and Palestinian people. He said that Pakistan had been a strong advocate for the cause of Kashmir and Palestine and urged the International community to play its role in resolving these disputes. He also emphasized that the overseas Pakistanis could play an important role in highlighting these disputes and sensitizing their representatives regarding human atrocities in IIOJK and Palestine.

The event was well attended by prominent members of the Pakistani American community including businessmen, academia, professionals, media and civil society members.