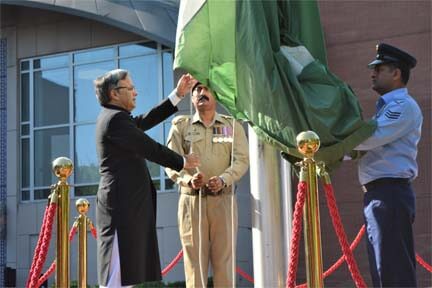 A flag hoisting ceremony was held at the Embassy of Pakistan Washington D.C. today to mark the auspicious occasion of the Independence Day of Pakistan.

Ambassador of Pakistan to the U.S. Dr. Asad M. Khan hoisted the Pakistani flag at the Embassy. Special messages of President Dr. Arif Alvi and Prime Minister Imran Khan were read out on the occasion. In their messages, both leaders congratulated the nation, paid tributes to the founding fathers, expressed solidarity with the people of Indian Illegally Occupied Jammu & Kashmir and highlighted Pakistan’s efforts to promote regional peace.

Ambassador Dr. Asad M. Khan, in his remarks, felicitated Pakistanis all over the world, particularly in the United States on the Independence Day. He paid homage to Pakistan’s founding fathers for their sacrifices and creating a separate homeland for the Muslims of the subcontinent. Ambassador Khan particularly underscored the important role Pakistani-American diaspora had played in Pakistan’s socio-economic development as well as building a closer partnership between Pakistan and the US. He also highlighted the measures taken by the government to further facilitate the Pakistani diaspora.

Members of the Pakistani community, media, students and officials from the Embassy attended the ceremony. It was also broadcast live on the Embassy’s official Facebook and Twitter accounts.