Pakistan’s Ambassador to the US, Dr. Asad Majeed Khan’s interview with Tom Fitzgerald “On the Hill” at FoxNews 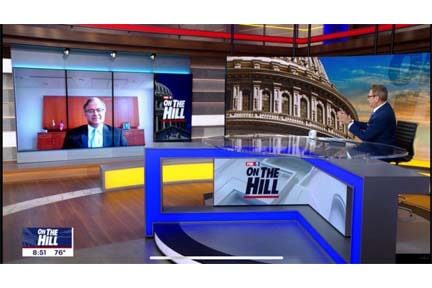 Pakistan’s Ambassador to the US, Dr. Asad Majeed Khan’s interview with Tom Fitzgerald in the program “On the Hill” at FoxNews

Tom Fitzgerald: Ambassador thank you for joining us this morning. I want to start with the Human crisis that’s under way right now because we’ll get into the politics of this in a moment. But what needs to happen right now on the ground to help these people who are trying to get out of Afghanistan and it can’t just be the United States what role Pakistan doing right now what is your nation involved in?

Ambassador: First of all thank you Tom for having me this morning and I think you have pointed out to the most important subject that is drawing all our attention and currently government of Pakistan is fully focused on helping in whatever way we can in the evacuation and repatriation of those who wish to leave Afghanistan. Infact, our embassy is perhaps the only embassy that is working round the clock, issuing visas to those who wish to go to Pakistan and not just that we have also notified that those who arrive at our airports and entry points including foreign nationals, those working for International Organizations and financial institutions will be allowed entry into Pakistan on arrival. We have, I can share with you that so far until yesterday we have repatriated 1800 diplomats, foreign nationals and Afghans working for foreign missions and international agencies and that process is going on as we speak. I think in terms of what the international community should do, its very important that we all work together.

Tom Fitzgerald: I want to ask you about that part because there have been questions over the past week about whether Pakistan is fully on board with what united States is trying to do with that country! Your PM was quoted this week as congratulating Afghans, for breaking ‘the shackles of slavery’. There appears to be a disconnect between your diplomatic and your Government implements in Pakistan and some of the former military commanders who appear to be supporting and what the Talibans have been doing since last couple of days could you clear this up for US. Is Pakistan supportive of the Taliban taking over Afghanistan or are they trying to insert themselves on to all of this to have a voice to work with Pakistan to stabilize that country?

Ambassador: I think to basically pick on one isolated quote and that too basically taken completely out of context is not fair talk. We, Pakistan has consistently articulated its position on the situation in Afghanistan. We are one country that has suffered the most. We have lost about 80,.000 Pakistan’s to this conflict. We have lost about 150 billion dollars and we know that if this conflict continues it is going to spill into Pakistan also and Prime Minister has been a consistent advocate for years now saying that there is no military solution and the only way forward is through dialogue and engagement between all parties and that is precisely what we are trying to do even when things developed and evolve so rapidly that they defied all assessments and surprised everybody and shocked everybody. We are working with Afghans and also happily working with the other members of the extended troika that includes China, that includes Russia, that includes United States in terms of coordinating our positions to make sure that the promises and declarations that Taliban have made, they live up to those promises.

Tom Fitzgerald: I want to ask you about those promises because one of those includes that Taliban said this week was that they are going to respect women’s right. It is a big concern here in United States. What inroads has Pakistan made to the Taliban to ensure that they follow up on that?

Ambassador: I think we are watching like all others in the international community in terms of what they do and how they do but the feedback we are getting from the crowd is that barring the airport where unfortunately things are going from bad to worse, rest of Kabul and rest of Afghanistan, there are no incidents of violence. Taliban have not conducted the way everyone feared they would, you know and they have opened schools, they have allowed female anchors to come in public so I think, tom, there is some room for optimism there so far.

Tom Fitzgerald: In Pakistan, you do have Pakistani Taliban. Are you concerned that if this Islamic State is established in Afghanistan, you could see such pressures within your own country and you are a Nuclear State?

Ambassador: We have maintained consistently that Afghanistan’s territory should not be used against any country that includes Pakistan, that includes United States and in fact for the precise reason we have consistently advocated for an inclusive government because instability, Tom, creates these ungoverned spaces that provides safe havens to those elements.