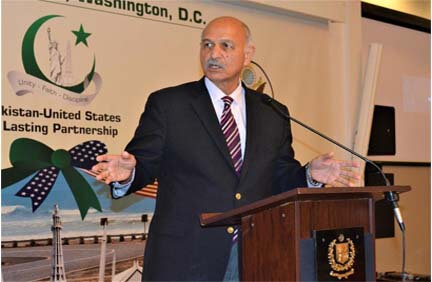 In his remarks, Ambassador Asad Majeed Khan, thanked the audience for participating in the event to express solidarity with Kashmiri brothers and sisters suffering under Indian occupation. He reiterated the Government of Pakistan’s continued moral, political and diplomatic support to the people of IIOJK in their struggle for right to self-determination against the worst form of repression unleashed by the Indian security forces for several decades. Ambassador Khan specially lauded the role played by the Pakistani and Kashmiri American community in highlighting the gross human rights violations in IIOJK.

Speaking on the occasion, Senator Mushahid Hussain Syed expressed Pakistan’s unflinching support for the just struggle of the Kashmiri people for their inalienable right to self-determination as envisaged in the UNSC Resolutions and in accordance with their wishes. He emphasized that Pakistan would avail every possible political, diplomatic and legal option to achieve this objective. He also drew the world’s attention to the grave threat to peace and security posed by Indian actions and called for the international community, particularly the US, to urge India to end its human rights violations in IIOJK and take measures to reduce tensions in the region.

Ambassador ®️ Tauqeer Hussain, Mr. Ghulam Nabi Fai, Professor Imtiaz Khan, and Col Wes Martin paid homage to the valiant struggle of the people of IIOJK against Indian oppression. They condemned in strongest terms the Indian atrocities and grave human rights violation in IIJOK, in particular, its attempt to change the demography of IIOJK which would make Kashmiris a minority in their own homeland. They also highlighted the grave threat posed to regional and global peace by Indian unilateral actions of August 05, 2019. They called on the world community to stand in solidarity with the people of IIOJK and urge India to stop its atrocities and human rights violations in occupied territory, revoke its illegal actions of August 05, 2019 and create an enabling environment for a dialogue with Pakistan to resolve this core dispute in accordance with the United Nations Security Council Resolutions and the wishes of the people of Jammu & Kashmir.

The event was very well attended by the participants from diverse backgrounds. The participants conveyed their strong support and solidarity with the people of IIOJK in their just struggle to end the Indian occupation of IIOJK.