Special occasion held at Embassy of Pakistan to celebrate Christmas 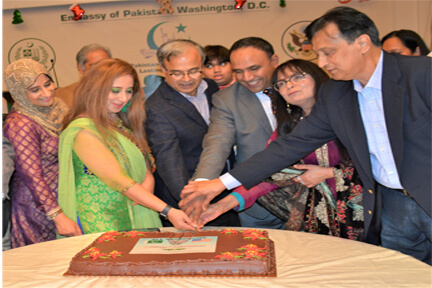 Embassy of Pakistan Washington co-hosted with All Neighbors, a community organization representing Christians and other faiths, a special event to celebrate Christmas here at the Embassy.

Founder of the All Neighbours, Mr. Ilyas Masih thanked Embassy of Pakistan especially Ambassador Dr. Asad Majeed Khan for opening the doors of the Embassy to the Christian community and holding events on major occasions such as Christmas and Easter on regular basis.

Congratulating Christian community in the United States and world across, Ambassador Dr Asad Majeed Khan stated that at a time when the tide of religious extremism threatened cherished values of tolerance and peace world-wide, showing respect for other faiths holds the key to promoting inter-faith harmony.

Highlighting religious diversity of Pakistan, the Ambassador recalled the assurance given by Pakistan’s founding father Quaid-e-Azam Muhammad Ali Jinnah of complete religious freedom for people of all faiths in the country.

He said that the way the entire leadership of the country and the whole nation has united to condemn a horrific incident of Sialkot was reassuring in stemming the tide of extremism and religious intolerance.

Ambassador said that Christmas carried message of love, peace, forgiveness and hope. He highlighted that Islam meant peace, therefore, religious harmony in the world was bound to usher in peace and security.

The event was attended by a large number of Christians and members from other faiths, who lauded the Embassy’s initiative of holding Christmas Celebrations graciously.