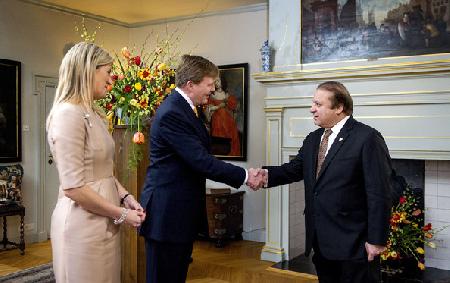 The Prime Minister of Pakistan, Mr. Muhammad Nawaz Sharif, attended the Nuclear Security Summit (NSS) held at The Hague, The Netherlands on 24-25 March 2014. Leaders from 53 States, as well as heads of United Nations (UN), International Atomic Energy Agency (IAEA), European Union (EU) and Interpol, attended the Summit, which was presided by Prime Minister Mark Rutte of The Netherlands.

The Prime Minister attended a banquet hosted by His Majesty Willem-Alexander, King of The Netherlands and held bilateral meetings with President Francois Hollande of France and Chancellor Angela Merkel of Germany. The US Secretary of State, Mr. John Kerry, also called on the Prime Minister.

At the invitation of Dutch Foreign Minister, Frans Timmermanns, Syed Tariq Fatemi, Special Assistant to the Prime Minister/ Minister of State, participated in a working lunch-eon hosted for Foreign Ministers of NSS participating States. Mr. Fatemi made a statement on "Nuclear Risks and International Security" which was the topic for luncheon meeting. Foreign Secretary Aizaz Ahmad Chaudhry was part of the Prime Minister's delegation. The Hague Summit was the third in the series of the Nuclear Security Summits. Since 2010, when the first Summit was held in Washington DC, Pakistan's active and constructive participation in the NSS process has been widely recognized by the international community.

Power of Attorney/Attestation of Documents

Team at the Embassy